Researchers Reinvent the Wheel for Vehicles of the Future

From the RI Archives 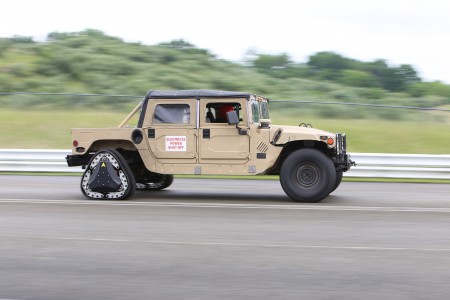 NREC has developed a vehicle with wheels that transform into tracks on the fly and a digital assistant that helps drivers find the safest, surest route across steep terrain as part of DARPA’s Ground X-Vehicle Technologies program.

Wheels that transform into tracks on the fly and a digital assistant that helps drivers find the safest, surest route across steep terrain — or even does the driving at times — are technologies that could change expectations of what vehicles can do. Both this reinvention of the wheel and creation of a hybrid human/computer driver were accomplished at Carnegie Mellon University’s National Robotics Engineering Center as part of a Defense Advanced Research Projects Agency (DARPA) program calledGround X-Vehicle Technologies, or GXV-T.

The reconfigurable wheel-track can function as either a wheel or a triangular track to enable vehicles to operate at high speed on roads, or to traverse diverse off-road terrains. It can transform from one mode to the other in less than two seconds while the vehicle is in motion.

“This shape-changing locomotion technology could enable vehicles to tackle a wide array of terrains at surprising speed,” said Dimi Apostolopoulos, a CMU Robotics Institute senior systems scientist who led the project at NREC. “Based on the testing we’ve done so far, we would expect such a vehicle to do amazing things.”

DARPA’s GVX-T program aims to reduce the need for armor by making combat vehicles faster, more maneuverable and capable of operating in a wide variety of environments. Apostolopoulos said the shape-shifting wheel-track has a number of potential civilian applications as well, including uses in forestry, mining and construction, and heavy equipment.

The core of the wheel-track concept is to adjust the size of the contact patch — the area of the wheel-track in contact with the ground — based on surface type and wheel loading. By reducing the contact patch on smooth surfaces, it is possible to achieve higher speeds. Increasing the contact patch maximizes traction, much like a snowshoe, and enables the vehicle to maneuver safely on soft soils. Today’s Humvees do something similar by increasing tire pressure on smooth, dry surfaces and reducing tire pressure in off-road situations, Apostolopoulos said.

Other groups have done something similar to NREC’s reconfigurable wheel-track, though those previous efforts usually have required halting the vehicle to transform from one mode to the other, Apostolopoulos noted. The ability to make these transformations on the fly, he added, is a critical requirement for vehicles that must handle changing terrain at high speed.

The reconfigurable wheel-track has a rubberized tread that sits atop a frame that can change shape. An early version used electric motors to change the shape of the frame, but the researchers soon realized they could transform the shape passively, using the speed of the wheel-track itself to power the shape change, rather than the complicated system of motors.

In its latest manifestation, the spinning wheel is transformed into a track by extending a Y-shaped support, which pushes the frame into a triangular shape. Simultaneously, application of a brake to stop the wheel from spinning causes the transmission to automatically shift from turning the wheel to turning a set of gears that drives the track. 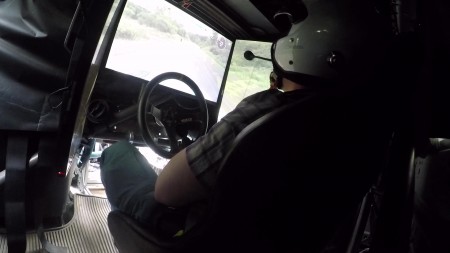 The ORCA system allows drivers who must pilot an off-road vehicle using only video displays to do so safely while maintaining speed across difficult terrain.

In the ORCA project, researchers developed a system that can help drivers select the best routes across undeveloped landscape; warn drivers of upcoming turns, obstacles and difficult terrain; and even drive autonomously when the driver needs to do something else.

Field testing showed this two-headed approach, combining human and computer drivers, boosted both vehicle speed and driver performance by 20 to 30 percent by most measures, said the project’s leader, Alonzo Kelly, professor of robotics.

As part of the GVX-T concept, vehicle windows might be eliminated to protect the driver. But driving an off-road vehicle using only a video screen is mentally taxing, Kelly said. Trying to also go fast — to improve the vehicle’s survivability — subjects the driver to cognitive overload, he added.

The trick is to develop an autonomous driving system that can collaborate with the human driver — processing sensor and other data, calculating an optimal route and then communicating helpful information that doesn’t overwhelm the driver. Even determining how to display the information on the video screen without obscuring things the driver needs to see can be a challenge, Kelly said.

Unlike a navigation system in a conventional car, ORCA can’t give the driver simple waypoint directions, such as “turn right at the next intersection,” because it was designed for off-road use. Instead, it relies on on-screen, graphical directions.

“Ultimately, half of this project ended up being a human factors engineering program,” he added.

Though developed for DARPA with military applications for on-board drivers in mind, ORCA is also well-suited for space missions, such as teleoperation of planetary rovers, Kelly said. Some aspects of ORCA also could be useful in consumer vehicles, such as for projecting route guidance or synthetic road signs onto the windshield using a heads-up display.

NREC is a part of Carnegie Mellon’s Robotics Institute that performs contract research and development for a variety of governmental and industrial clients.