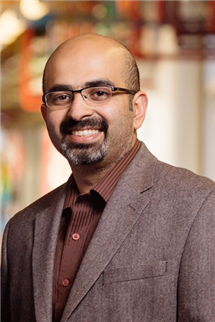 Girish Chowdhary Assistant Professor Department of Agricultural and Biological Engineering, University of Illinois at Urbana-Champaign
Friday, November 15
3:30 pm to 4:30 pm
Gates Hillman Center 6115
The Robots are Coming – to your Farm! AKA: Autonomous and Intelligent Robots in Unstructured Field Environments

Abstract: What if a team of collaborative autonomous robots grew your food for you? In this talk, I will discuss some key advances in robotics, machine learning, and autonomy that will one day enable teams of small robots to grow food for you in your backyard in a fundamentally more sustainable way than modern mega-farms! Teams of small aerial and ground robots could be a potential solution to many of the serious problems that modern agriculture is facing. However, fully autonomous robots that operate without supervision for weeks, months, or entire growing season are not yet practical. I will discuss my group’s theoretical and practical work towards the underlying challenging problems in robotic systems, autonomy, sensing, and learning. I will begin with our lightweight, compact, and autonomous field robot TerraSentia and the recent successes of this type of undercanopy robots for high-throughput phenotyping with deep learning-based machine vision. I will also discuss how to make a team of  autonomous robots learn to coordinate to weed large  agricultural farms under partial observability. These direct applications will help me make the case for the type of reinforcement learning and adaptive control that are necessary to usher in the next generation of autonomous field robots that learn to solve complex problems in harsh, changing, and dynamic environments. I will then end with an overview of our new MURI, in which we are working towards developing AI and control that leverages neurodynamics inspired by the Octopus brain.

Speaker Bio: Girish Chowdhary is an assistant professor at the University of Illinois at Urbana-Champaign and the director of the Field Robotics Engineering and Science Hub (FRESH) at UIUC. Girish is affiliated with Agricultural and Biological Engineering, Aerospace Engineering, Computer Science, and Electrical Engineering. He holds a PhD (2010) from Georgia Institute of Technology in Aerospace Engineering. He was a postdoc at the Laboratory for Information and Decision Systems (LIDS) of the Massachusetts Institute of Technology (2011-2013), and an assistant professor at Oklahoma State University’s Mechanical and Aerospace Engineering department (2013-2016). He also worked with the German Aerospace Center’s (DLR’s) Institute of Flight Systems for around three years (2003-2006). Girish’s work on AI and adaptive flight control has led to several key advances to flight-control and his Dave Ward memorial award by Aerospace Guidance and Controls committee. Some highlights include creation of an autopilot that can handle severe failure cases mid-flight in real-time. Girish is the author of over 90 publications in autonomy and robotics, and PI on NSF, AFOSR, NASA, ARPA-E, and DOE grants, and an ONR MURI. He is the winner of the Air Force Young Investigator Award, and several best paper awards, including a best systems paper award at RSS 2018 for his recent work on the agricultural robot TerraSentia, which has since been heralded as the device that can usher in a new era in high throughput phenotyping. He is the cofounder of EarthSense Inc. (www.earthsense.co), working towards making sustainable farming profitable with ultralight field robots.